In this notification, it is stated that the President has been pleased to sanction the revision of Basic Pay Scales & Allowances with effect from 1st July 2022 for the civil employees of the Federal Government, paid out of civil estimates and from the Defence estimates as detailed in the following paragraphs.

In case of Personal Pay being drawn by an employee as part of his/her basic pay beyond the maximum of his/her pay scale on 30-06-2022, he/she shall continue to draw such pay in the Basic Pay Scales-2022 at the revised rates.

Annual increment shall continue to be admissible, subject to the existing conditions, on 1st December each year.

An Ad-hoc Relief Allowance-2022 @ 15% of the running basic pay of BPS-2017 shall be allowed to the civil employees of the Federal Government as well as civilians paid out of Defence estimates including contingent paid staff and contract employees employed against civil posts in Basic Pay Scales on standard terms and conditions of contract appointment with effect from 01-07-2022 and shall stand frozen at the same level till further orders.

All the new entrants shall be allowed Ad-hoc Relief Allowance-2022 @ 15% of the Minimum of the relevant basic pay of BPS-2017 on the notional basis with effect from 01-07-2022 till further orders and shall stand frozen at the same level.

The Ad-hoc Relief Allowance will be subject to Income Tax.

The Ad-hoc Relief Allowance will be admissible during leave and the entire period of L.P.R. except during extraordinary leave.

The Ad-hoc Relief Allowance will not be treated as part of emoluments for the purpose of calculation of Pension/Gratuity and recovery of House Rent.

The Ad-hoc Relief Allowance will not be admissible to the employees during the tenure of their posting/deputation abroad.

The Ad-hoc Relief Allowance will be admissible to the employees on their repatriation from posting/deputation abroad at the rate and amount which would have been admissible to them, had they not been posted abroad.

The Ad-hoc Relief Allowance will be admissible during the period of suspension.

The term “Basic Pay” will also include the amount of Personal Pay granted on account of annual increment(s) beyond the maximum of the existing pay scales.

All the Special Pays, Special Allowances or the Allowances admissible as percentage of pay (excluding those which are capped by fixing maximum limit) including House Rent Allowance and the Allowance/Special Allowance equal to one month basic pay, granted to Federal Government employees irrespective of his/her posting in Ministry/Division/Department/Office etc. including civil employees in BPS 1-22 of Judiciary shall stand frozen at the level of its admissibility as on 30-06-2022. 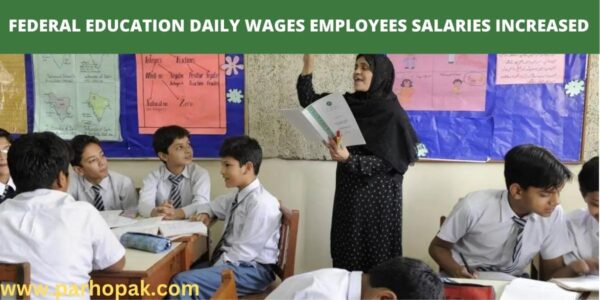